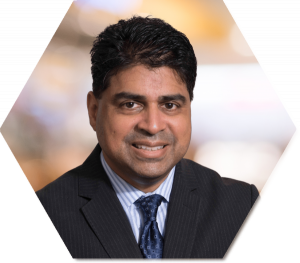 Suresh Rajan is the Executive Chairman and Founder of LCR Capital Partners. The majority shareholder, his role is to drive the expansion of LCR’s core EB-5 business into new markets, develop adjacent revenue opportunities, and provide strategic leadership across the team. A first-generation immigrant himself, Suresh is focused on ensuring LCR delivers the highest level of service, in line with its family values, everywhere in the world.

Suresh started his career as a policy advisor to members of the US Congress. He recruited candidates and managed several national campaigns. Later he was the first Executive Director of the Washington-based John Quincy Adams Society where he brought together Fortune 500 chief executives and members of Congress to discuss important policy issues affecting many industries including telecom, banking and healthcare. Suresh also served as a negotiator on a number of international trade agreements including NAFTA and GATT.

After working with government, Suresh joined McKinsey & Company and worked primarily in the areas of strategy development, principal investing, mergers and acquisitions, warehousing and distribution, and e-commerce. Suresh served a variety of clients that were leaders in the media, telecom, pulp and paper, petroleum and optical industries.

Prior to launching LCR, Suresh served as President and Chief Executive Officer of Java Nova LLC, a private equity funded franchisee of Dunkin Donuts. Suresh’s focus was on real estate selection, market development, finance and human resources. He also led another startup, SPD Ventures, which supported the growth of Quiznos Sub franchises and set numerous national sales and development records for the brand.

He received a dual-B.A. in Political Science and International Relations from the University of Southern California and a Master of Business Administration in General Management from the Harvard Business School.