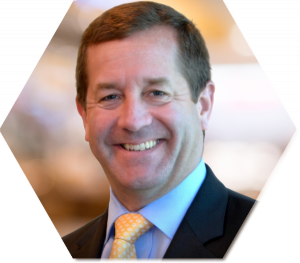 Sherman Baldwin is responsible for leading all aspects of LCR Capital Partners and devising groundbreaking growth strategies across the company.

Prior to joining LCR Capital Partners, Mr. Baldwin was a Managing Director at Accenture, serving as the Global Client Executive and P&L owner for one of the firm’s largest and most strategic clients. He was responsible for all go to market and traditional client service activities across the client enterprise. In this role he led Accenture’s efforts to transform one of the world’s largest conglomerates into a leading “digital industrial” company.

Previously, he led the Management Consulting practice for CMT North America’s Atlantic Region, and prior to that he was the Global Managing Director for Accenture’s Aerospace & Defense business. Previously, Sherman was the Vice President of Strategy & Development for Pratt & Whitney, the aircraft engine division of United Technologies Corporation, a $40B Dow 30 Company. He has also worked as a Vice President and Managing Director focused on the aerospace & defense and information technology portfolio companies of J.F. Lehman & Company, a private equity partnership focused on mid-market leveraged buy outs. He started his business career at McKinsey & Company where he was an Engagement Manager developing growth strategies for companies in the aerospace & defense, computer and telecommunications industries.

Mr. Baldwin’s experience comprises over 20 years of P&L leadership, strategy and transformation work for Fortune 500 corporations, private equity firms and the Pentagon. From 1987 to 1995, he served in the U.S. Navy as a carrier pilot, a strategic planner for the Joint Chiefs of Staff and a Special Assistant to the Secretary of the Navy. He earned a Bachelor of Arts in Political Science from Yale University, a Masters degree in Telecommunications from George Washington University and an M.B.A. from the Harvard Business School.

He is also a Lecturer on Innovation & Leadership at Yale. Mr. Baldwin is a Henry Crown Fellow of the Aspen Institute, a member of the Council on Foreign Relations and the American Council on Germany He has written award winning articles on leadership and national security and is the author of Ironclaw, a book about his combat experience as a carrier pilot during the first Persian Gulf War and also Growing Up with Harry, a book about family values and the life lessons learned from his father.