Top 10 U.S. Cities With the Happiest – And Most Miserable Employees

Home > General News  > Top 10 U.S. Cities With the Happiest – And Most Miserable Employees

The U.S. is a large and diverse country and there is a town to suit every employee. The question however is how to narrow it down and find the city or state that’s right for you?

In the current job market, this is an increasingly question that may mean your most talented employees receive offers from rivals.

“Happiness” was based on four things: interaction with their coworkers, to what extent they are trusted to work independently, support from management, and overall company culture.

Top 10 cities with highest employee satisfaction levels in the U.S.

According to Kununu, an Employer rating platform that examined a database containing more than 87,000 employee reviews, the top 10 cities with the highest scores amongst the top 50 largest metropolitan areas on a scale of 1-5 are:

It is interesting to note that the two towns with the highest score achieved them, in part, as a result of the quality of life outside of work; some of these cannot be easily replicated, such as plenty of sunshine and beautiful local beaches. 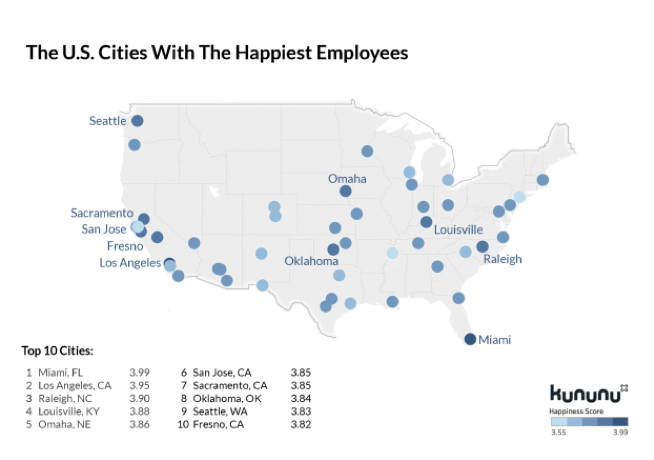 Further, companies have limited to no influence over a region/area’s cost of living. However, the data suggests that job satisfaction in these cities is linked to the availability of affordable housing, a factor that eases the financial load off of area residents. Indeed, the high cost of living in New York contributed to its ranking in last place on the list of 50.

Despite this, Kununu’s Director of Global Communications, Johannes Prüller believes that working for the right boss is a far more essential factor. He comments that most people join organizations but quit because of their bosses. As such, he believes that creating a supportive environment for workers to succeed and thrive is crucial to getting the best and brightest talent to stick around.

‘Leadership support’, or the lack thereof, was a common factor amongst the lowest 10 ranked cities.

Given this, the lowest scoring cities are as follows, on a scale of 1-5:

On a more positive note, Kununu found that employees in the US somewhat felt better about their jobs in 2018 than they did in the previous year. This may be explained partly by a greater focus on team work and collaboration, leading people to report higher scores of ‘average happiness’ that beat 2017 performance scores by 12.3%.