The Economic Impact of the EB-5 Program

Our last blog discussed the fraud rate of the EB-5 Program and concluded that despite a small number of high profile reports, the EB-5 program has been a net positive to the U.S. economy and local communities around the country.

The EB-5 Program has made contributions to the US economy directly through capital invested by foreign nationals seeking green cards. The program has also made contributions indirectly by serving as a medium for job creation, commercial enterprise development, and the immigration of high net-worth investors, all of which increase tax revenues. 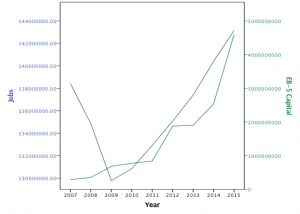 Before 2008 there was not a very strong correlation between EB-5 capital invested and US jobs. However, after the financial crisis, people began searching for alternative financing and EB-5 capital became a solution. Since 2008, EB-5 capital invested and US jobs have a very strong positive correlation that is significant at the 99.9% confidence level, indicating that the EB-5 program may have a noteworthy impact on the US economy.  After the recession in 2008, employment in the US was at a low of 129,774,000 people employed in 2009. After 2009, employment increased as the economy stabilized. Between 2010-2013, the EB-5 Program either created or supported over 116,200 US jobs, which was about 2% of the new job creation in those years and a helpful contribution to the economic recovery.

The breakdown of the EB-5 program’s economic contributions at a glance: 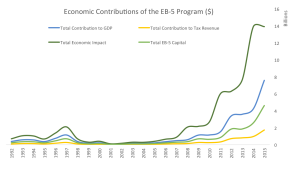 To learn more about LCR and LCR’s projects, contact one of our team members in one of our various offices around the world.

Data from IIUSA, Bureau of Economic Analysis, Bureau of Labor Statistics and the World Bank