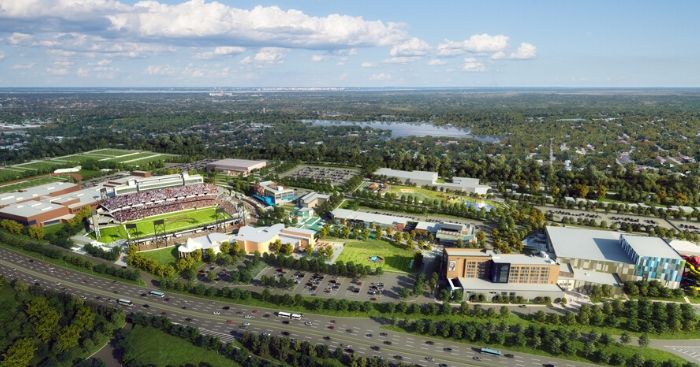 LCR is proud to announce it has joined Industrial Realty Group, LLC (IRG), the developer of Johnson Controls Hall of Fame Village, as partners of a new EB-5 fund that will raise development capital for the project.

Based in Canton, Ohio, the Pro Football Hall of Fame was opened in 1963 and enshrines people that have made exceptional contributions to the sport of professional American football either as part of the American Professional Football Association as it was then known, or the National Football League (NFL) as it is called today.  Only 346 members have been inducted.

The Johnson Controls Hall of Fame Village, a 200-acre, mixed-use development that surrounds the museum, was made possible through a partnership between the Pro Football Hall of Fame and Industrial Realty Group (IRG) and was begun in 2015. The two major components that have been completed in Phase 1 of the development are the Tom Benson Hall of Fame Stadium and the National Youth Football and Sports Complex. These host major events including the annual Enshrinement Week, the Hall of Fame Game, and the Concert for Legends, as well as high school and college football regular season and playoff games, and globally-recognized, musical acts such as Aerosmith, Pitbull, Kid Rock, Maroon 5 and Imagine Dragons.

“We have been part of the Pro Football Hall of Fame Village since the beginning. There has been a lot accomplished already and the progress made in the last year on management, funding and development plans is really exciting. We are committed to the vision and the plan,” said Stuart Lichter, President of IRG.

Phase 2 includes plans for the Hall of Fame Tapestry Hotel by Hilton, the Constellation Center for Excellence including a coaches university, the Hall of Fame Waterpark, and the Center for Performance providing a conference center and field house, all linked by the Hall of Fame Promenade including restaurants and retail catering to visitors to the properties. There is also planned an Outdoor Interactive Zone that will provide an open park and site for exhibitions.

Since its opening in 2017, the National Youth Football and Sports Complex has hosted over 300,000 tournament participants and their families with 80% of these participants coming from outside of the State of Ohio. The Hall of Fame Village currently sees over 1,000,000 visitors per year.

“Global families know and love how the US builds entertainment destinations. This project gives them the chance to be part of an iconic development in the heart of America,” said Suresh Rajan, Executive Chairman of LCR Capital.

As a USCIS project, the development has already secured I-924 exemplar approval and over 100 EB-5 investors have received I-526 approvals, which is the first step toward U.S. residency through the EB-5 Immigrant Investors program. The work to date has already created over 3,650 jobs which has exceeded the required 10 jobs per EB-5 investor.

“The opportunity to support the development of the Hall of Fame Village is an honor for LCR. We know when our clients decide to become first generation Americans, they want to invest with high quality developers like IRG, help build American communities like Canton and embrace American institutions like the Hall of Fame Village.” Sherman Baldwin, CEO of LCR Capital Partners.

In January, 2020, HOF Village, LLC, announced that it secured multimillion dollar funding from Constellation to implement energy efficiency measures and finance construction of the Constellation Center for Excellence.

In October 2019, NFL owners voted at their league meeting to invest up to $10 million for the development of the Village, and in April 2020, the NFL Alumni Association committed to building its headquarters and NFL Alumni Academy on the site.

On September 16, 2019, the HOF Village LLC entered into a definitive business combination agreement with Gordon Pointe Acquisition Corp. (NASDAQ: GPAQ, GPAQU, GPAQW) that is expected to be completed in June / July of 2020. Upon the closing of the transaction, the combined company will change its name to Hall of Fame Resort & Entertainment Company and trade on the NASDAQ stock exchange under the ticker symbol “HOFV.”

“Our purpose is to promote and celebrate American Football.” said Mike Crawford, CEO of the Johnson Controls Hall of Fame Village who formerly led the development of Disney’s international theme parks. “It is a joy to meet the EB-5 investors that have made the decision to move to this great country and we welcome them wholeheartedly to our community of fans and supporters. We are creating a world-class destination and look forward to working with world-class investors.”