How long does one have to wait for a I-526 petition approval?

Possible good news for those who have already waited a long time as well as for new petitioners.
The number of I-526 applications processed has increased in recent months, and the number of pending cases has decreased down to less than half of what it was 15 months ago.

If the flow rate continues to increase, we will see an even lower number of pending forms, suggesting that approval may be possible within a year. July 2017 was a disappointing month with a high volume of almost 25,000 pending I-526 cases leaving applicants on hold for quite some time. 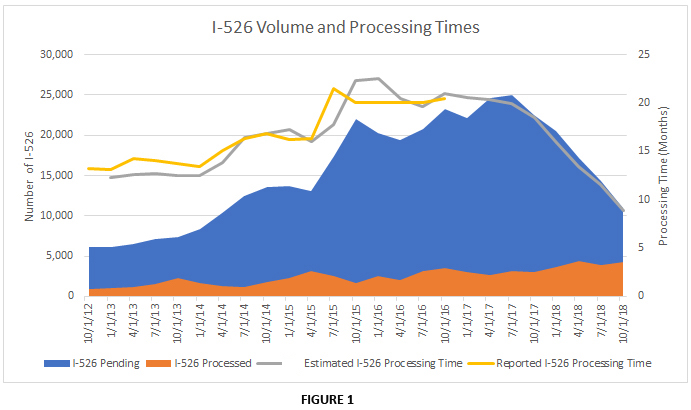 The orange portion of Figure 1 graph above indicates an increasing number of I-526 cases processed. With the sudden drop of pending forms (as can be seen), we estimate that the processing time of these forms may well drop to 10 months. If this continues, together with the new draft for EB-5, we see the possibility of having the EB-5 once again a viable track for fast permanent-residency issue. Investors will enjoy the benefit of having their visa processed quicker by the USCIS.

How long will a Vietnam-born visa applicant or I-526 petitioner have to wait for the approval or availability of visa through the EB-5 program?

Many applicants affected are worried about the 7.2-year estimated waiting time for Vietnam-born people applying for a visa through the EB-5 program. The estimation comes from Charles Oppenheim from the Department of State, but the good news is that this is an estimation made based on data in October 2018. If you had filed yours before or after that, there are chances that you will not have to wait that long. 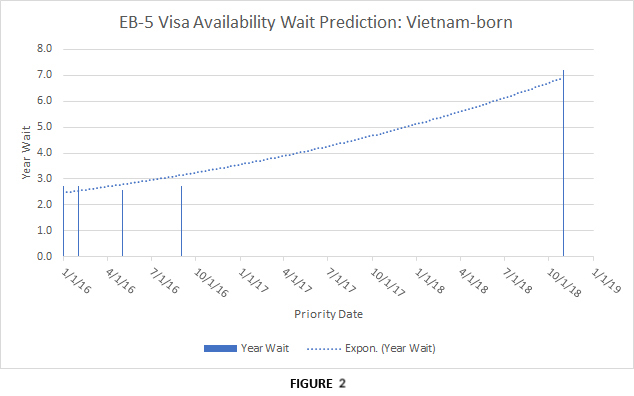 The waiting time trends for approved petitions can be seen in Figure 2: the dotted line is roughly sketched from different points of actual processing time shown by the columns. The actual waiting time was determined by us calculating the time range between the release of Visa Bulletin Dates to the Final Action Date. It is a rough determination as there are numerous relevant confounding factors. Nonetheless, the figure provides a good guide.

Additionally, you can include the quarterly data of I-526 approval and filling times into the calculation. The fluctuation of that data will give a more precise trend and prediction and less of linear line. Note that including fixes from both legislative and/ administrative departments will give a different look from the chart here.

Can an India-born visa and I-526 applicant gain his or her visa number before it runs out during FY2019 such as before the Department of State declares the official Final Action Date?

There is an equal chance for one to get his or her visa during FY2019 and to not get it if the person had applied recently. It depends on how the mountain of petitions is dealt with and how many of them are issued.

These two tables from the 10/30/2018 presentation by Charles Oppenheim represents the number of pending applications on subsequent priority dates during the FY2019. This data will become the base of our prediction of how the answer is going to be good and bad.

Here’s how the result can go south for recent India-born applicants. If the USCIS decided to adjudicate for the older I-526 petitions and grant them approvals as well as qualification for their documents for the visa, recent applicants would have a slim or non-existent chance of obtaining their visa during FY2019. Even if one recently applied and had his or her application processed early, such does not increase the chance as the USCIS issue visa numbers based on the priority date not the date of application.

It becomes clear when we consider the fact that Oppenheim is not allowed to release visa numbers in bulk, but only 27% per quarter during the first three quarters to the people who are qualified. The delay occurs as there is a limited number of people approved quarterly, but a high number of petitions filed and approved every day. 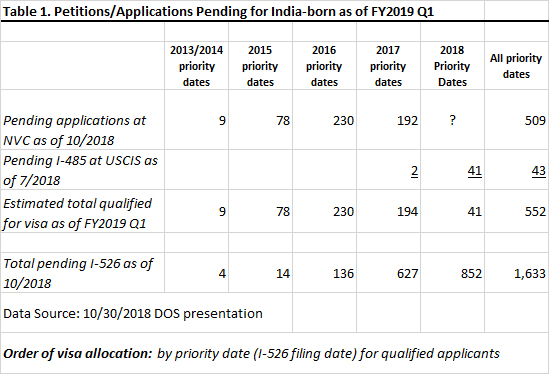 But the good news comes when the number of qualified India-born applicants do not increase for the next few quarters and include more of recent applicants during FY2019. 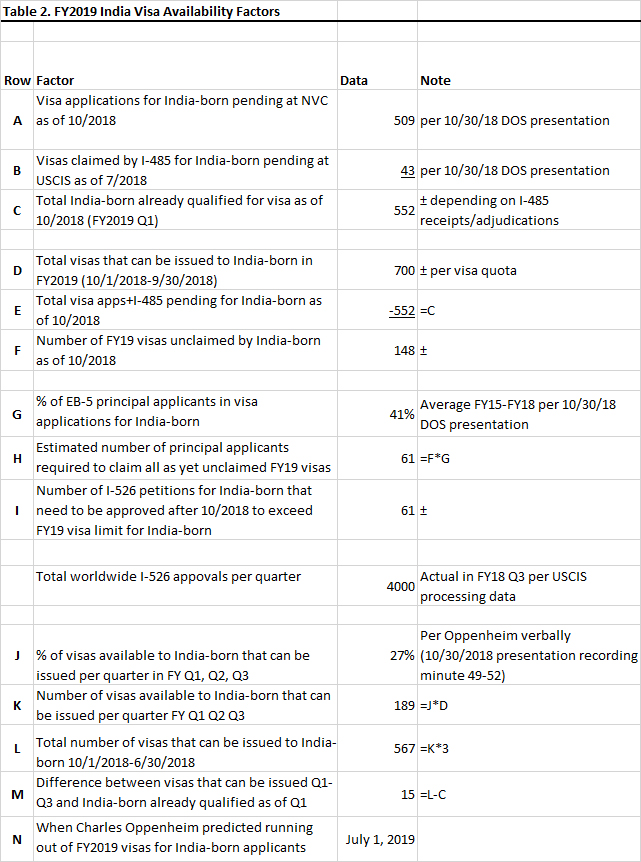 Add to that the growing popularity of expedited projects for Indians and the slow pace of the USCIS in processing past I-526 applications and qualifying documents for it. If so, those who are declared qualified for visas during the first quarter of FY2019(approximately 500 people) will have a high probability of receiving their visa during the same fiscal year.

The majority of 60 investors and their family members will also have higher chances of being approved for and qualified documentarily during the same year and then, be granted their visa numbers during the same fiscal year.

India-born people who filed I-526; however, will less likely be granted their visa number during FY2019 if we are to look closely at both tables from Oppenheim’s presentation. Even if they had been quick to get their approvals, it would fail to benefit them greatly due to the high number of applications awaiting in line. While there is the probability of a better outcome, you will need to analyze with recent reports and study the spreadsheets of EB-5 approvals, Final Action Dates and the trend that is going on.

A more precise analyst with the help of an immigration lawyer will help you prepare for the worst-case scenario and other points during the process from the pending petition of I-526 to how to be documentarily qualified. Granted that for some people, the date of their visa issue is vital, it is advised for you to be educated in what are your rights and benefits as well as limitations during the different stages of the process.