How Do Franchises Affect the Economy?

Home > EB-5 Investment Visa  > How Do Franchises Affect the Economy?

Franchises are a part of our everyday life. We have all gotten a cup of coffee at Dunkin’ Donuts in the morning, booked a room at a Marriott hotel for our vacation, or grabbed a quick lunch from McDonald’s. These are important to our daily life; however, looking at the big picture, franchises have an even greater impact than we might realize.

Lynn Berberich lost her job during the Great Recession in 2009. She decided to take it as an opportunity to start again and do something she had always wanted to do- own her own business. She started a BrightStar Care franchise, which is a home care agency. According to Lynn, one benefit to franchising is not having to start completely from scratch. Additionally, the larger corporation the franchise is part of has the scope and resources to make more effective programs than a single owner could do on their own.

Lynn’s business has made a huge impact economically. She “created almost 200 jobs in [her] community that didn’t exist before. That’s something that wouldn’t have happened without franchising.” The data seems to point to a similar conclusion: franchises have a significant impact on the economy.

PricewaterhouseCoopers LLP (PwC) recently released the fourth volume of The Economic Impact of Franchised Businesses. The report provides data indicating that franchised businesses are a valuable part of the U.S. economy. Based on the data, franchised businesses not only make direct contributions to society. When factoring in indirect contributions from IMPLAN economic modeling software, the total contribution franchises make to the U.S. economy is compelling. (IMPLAN is an economic modeling tool that uses input-output tables to measure the ripple effects of industries purchasing from other industries).

LCR Capital Partners operates in the EB-5 industry. The EB-5 Program is a government visa program that grants visas to foreign nationals whose investments create at least 10 U.S. jobs. According to the U.S. Citizenship and Immigration Services (USCIS), the EB-5 program was created in 1990 with the intent to “stimulate the U.S. economy through job creation and capital investment by foreign investors.” 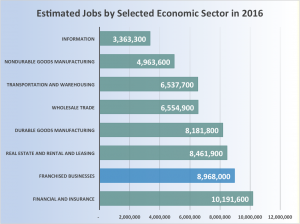 Based on this data report, it is evident that franchises are a major contributor to U.S. jobs. Franchised businesses are second only to the financial/insurance sector in providing jobs to the economy in 2016. Franchised businesses provide more jobs than real estate, durable goods manufacturing, wholesale trade, transportation, non-durable goods manufacturing, and information (including software, television, motion pictures, etc).  This high level of job creation lines up well with the interest of stakeholders in the EB-5 industry, as one of the main requirements to receive a green card is to create 10 jobs.

LCR Capital Partners has recognized the value of franchises both to the U.S. economy and to the original goal of EB-5 program. Taking this one step further, LCR focuses specifically on the Quick Service Restaurant (QSR) sector. QSR franchises contribute to 30.5% of GDP and 45.5% of all jobs that franchised businesses create, making them the highest contributor to the economy than any other type of franchise. LCR targets franchises that have strong brands and track records, such as Dunkin’ Donuts.

So next time you are grabbing a coffee, staying in a hotel room, or eating a sandwich at a franchised business, remember that in a way, you are making a contribution to the economy.

The Economic Impact of Franchised Businesses report can be found at www.franchiseeconomy.com

To learn more about LCR and LCR’s projects, contact one of our team members in one of our various offices around the world.