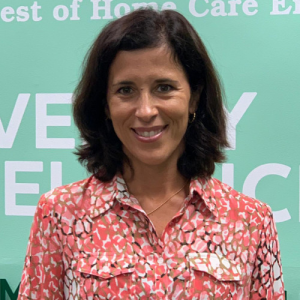 A native of Brazil, Erika Stupiello is the franchise owner of Home Helpers in Sarasota, FL. Erika received her Green Card in May of 2019 and moved to the U.S. after many years of consideration, splitting her time between the United States with her son and Brazil.

In this article we’ll be sharing excerpts from our conversation which you can listen to by subscribing to our podcast on iTunes or Spotify.

Listen to the Podcast here

Supporting the Interests of Children Living in the United States

“Since my son was a little boy he wanted to become a pilot. Supporting his desire and being with him while he studied high school in the United States was something my husband and I wanted to do.” 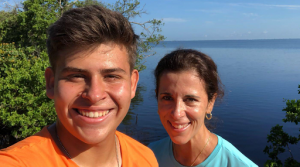 The Stupiello family started considering a move to the United States with the dream of their son, Bruno. Erica, a tenured professor with a phd in linguistics and her husband, an engineer in the sugar and ethanol industry started to investigate the prospect of a move.

“Since my son was a little boy he wanted to become a pilot.” Erika shared, “Supporting his desire and being with him while he studied high school in the United States was something my husband and I wanted to do.”

Encouraging the interests of their son while being close was a huge priority for the entire family. Bruno was thriving in the high school here in the states and Erika didn’t want to miss a moment.

Erika and her husband were valued members of their community in Brazil and had spent their entire professional careers there. The consideration and decision to move to the United States and pursue citizenship through investment was one of great deliberation. In the end the Stupiello family decided that being together was the most important factor.

The opportunity to create a new life, with new professional pursuits in a new community was exciting.

Investing in Citizenship and the Future

“Making the decision to move to the US wasn’t easy. My husband and I both had meaningful careers in Brazil. As a tenured linguistics professor it was a huge change of pace to own a business.”

While the decision to move to the United States was a challenge, the next consideration was how to make it a reality.

As a first step Erika pursued her certification to be a nursing assistant. This first hand experience complemented the way in which she was a natural caregiver and provided a new way to be of service.

Being a part of the community is incredibly important to Erika and her contributions in caring for the elderly was motivated from her own loss. For this story, listen in on the podcast.

After developing the nursing qualifications Erika further invested in herself and their professional future by becoming a Certified Senior Advisor. This certification provided more education around the aging process, the challenges, how to be of highest service to the families and those you’re caring for.

Through the process of acquiring new skills the Stupiello family also considered which program would best meet their needs. There was consideration to the EB-2 Visa which is an employment-based immigration visa based on the advanced degrees both members of the family had.

In the end the EB-5 Investor Visa was the best path forward creating new opportunities to contribute to their new community.

“We help seniors stay home safe and independently for as long as possible. Caring about people, listening to what they need has always been very important to me.” 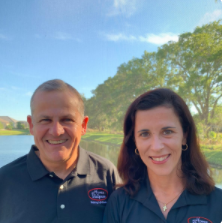 Early on in her experience Erika participated in a workshop in Florida about how to go about opening a business. “I happened to meet my mentor at that event and it’s been very beneficial.” Erika shared.

Erika’s mentor helped in identifying the right franchise, the right business model based on skills and background and took into account the type of life the Stupiello’s wanted to lead here in the United States.

“It’s been 9 months since we received our license as a home health agency here in Florida and we’re already making a great impact.” Sharing further: “It’s not a fast process but from volunteering at senior centers to medical clinics we’re making a great impact on the community and starting to build our business.”

“Being a linguist in my previous professional pursuit is helping a tremendous amount.” Erika went on to share a story of a recent client who suffers from dementia. As a native Polish speaker he kept slipping back into his first language. Erika’s respect for language and the importance of helping her client feel safe and supported led her to find an aid that could speak Polish further support his needs.

Advice for the Considering eb5 Visa in the USA

Erika was generous to share her advice to anyone considering immigrating to the USA with an EB-5 Visa.

“Have patience. Do your research and trust the process. The right company and the right investment will help you travel the ups and downs of the process.”

Thank you Erika for sharing your experience, we’re grateful to have you in our community making a special impact to everyone you help.

Listen in to the full conversation with Erika on iTunes or Spotify.