An Update on EB-5 Processing Times

A rising concern among EB-5 investors recently has been the increasing processing times for I-526 and I-829 petitions. According to the October 2016 Visa Bulletin, all EB-5 filing applications are current, with the exception of China. This means that investors from every country except for China may submit EB-5 applications and there will be immediate action. For Chinese investors, applications submitted before June 15th, 2014 will receive immediate action. 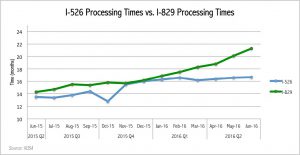 However, applications submitted after are subject to a backlog, known as retrogression.

Even non-Chinese investors who are not subject to retrogression are concerned. Overall processing times for both I-526 and I-829 petitions have been on a relatively steady upward trend, which is likely a result of the higher influx of petitions coming in that USCIS has to process.  Since the financial crisis in 2008, the program has experienced tremendous growth. 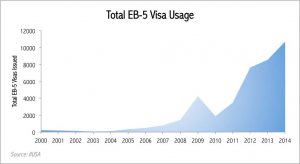 The EB-5 Program was due for legislative changes on September 30th, 2016 that eventually was pushed back to December 9th, 2016. It has been proposed by some industry stakeholders to increase the limit on the number of EB-5 visas the U.S. issues, which is currently 10,000 a year. This is a potential solution for the problem; however, until Congress passes legislative reforms, it is unclear what the future of these processing times will look like.

All data from IIUSA (Association to Invest in the USA) and the U.S. Department of State